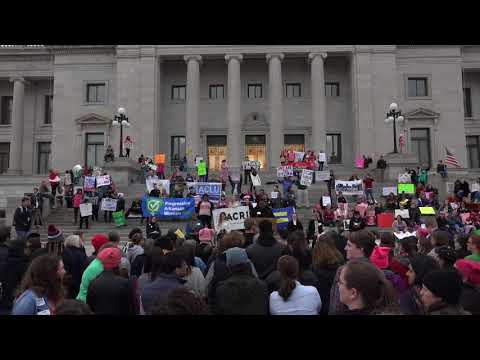 Forty-five years ago, the U.S. Supreme Court affirmed a fundamental truth: that a woman’s right to personal autonomy must include the ability to make the most deeply personal decision of all: the decision of when and whether to have a child.

A half-century later, Roe v. Wade remains the law of the land but politicians are still trying to drag us backwards with unconstitutional abortion restrictions that endanger women and their health.

In 2017 alone, 19 states adopted 63 new restrictions on abortion rights and access – the  largest number of abortion restrictions enacted in a year since 2013.
Included in this alarming number is a tsunami of draconian abortion restrictions passed by politicians right here in Arkansas: trying to shutter clinics, ban safe abortion methods, and force women to undergo invasive interrogations about their motives.
These demeaning restrictions serve no legitimate medical purpose. Their goal is to make it impossible for some women to obtain an abortion, and shame and demoralize those who do.
Arkansas politicians have done more than interfere with women’s personal medical decisions – they’ve barged right into the exam room to make outlandish demands of women and their health care providers.
Regardless of your personal beliefs about abortion, once a woman has decided to end her pregnancy, we need to respect that the decision is hers to make with her family, her faith, and her doctor. Politicians have no business shaming, punishing, or burdening women for these decisions, or forcing them to continue pregnancies against their will.
That is why seven out of 10 Americans oppose overturning Roe v. Wade and why the ACLU of Arkansas is challenging these degrading restrictions in court – and stopping many of them in their tracks.
In July, a federal judge in Arkansas blocked four of these provisions from taking effect, noting that they “do not advance interests in women’s health.”
The threats to reproductive freedom have continued at the federal level as well, where the Trump administration has stacked his administration with anti-abortion extremists and where far-right groups are actively working to “outlaw” Roe v. Wade.
One of Trump’s appointees, Scott Lloyd, who heads the refugee resettlement program,  has adopted a policy of effectively banning abortion for young immigrant women in federal custody – a policy that the ACLU is challenging in court.
No matter what creative excuses politicians cook up to justify their efforts to push abortion care out of reach, we will continue to challenge them – in the courts, in state capitols and in communities across the state.  And we’re not alone.
The danger Trump poses to our fundamental rights has ignited a groundswell of activism, especially among women, who are taking to the streets, calling their elected officials, and running for office themselves.
Politicians who insist on interfering with women’s personal medical decisions may find themselves not only on the losing end of a lawsuit, but on the losing end of the next election as well.
Related Issues

Arkansans Abortion Rights are Under Attack.

Abortion Access is at Stake, But We Will Do Everything We Can to...

What You Need to Know About Arkansas Politicians' Latest Sneak...

ACLU and Center for Reproductive Rights Win in Federal Court,...